The Facebook and Twitter is fast becoming a powerhouse of marketing activity due to the huge numbers of engaged users on the site and the simplicity of connecting with them directly. Do you know that 87% of the internet population is available on the Facebook and twitters or other sites? Yes it is, If you never perform twitter and Facebook promotion for your business so its mean you are continue loosing lot of customers or if you already promoting a business, product, brand or some public figure at twitter and Facebook but actually not getting expected output so there is lot of spice to make your movie super hit . May be that’s why you are reading this article.

Foremost one need to understand differences between a tweets and a Facebook post updates. Facebook seems to be much broader than Twitter’s 140-character limit. On Facebook, the goal is user interaction, while on Twitter, it’s all about brand evangelism. But, marketing goals of both social media platforms are similar —

Not be only active but make Successful Conversation Oriented

Both Twitter and Facebook enable brands to learn about what people are saying about your products, services and they make great sound that easily attract attention of other people. It’s one of finest way for get noticed to your service by joining them, however it’s not easy but an expert may take benefits of this conversation and make it in favor of their organization. First benefits that you know current agenda which is like fire in many community.  Then you just need to write some passionate answered on your site and share it on that particular conversation with small explanation. Meanwhile, you may get awesome response so you may simply share it on your FB profile or twitter.

The goal of posting Facebook status updates is to encourage interactions and engagement on that update and to push creative content using a variety of media that users can share with their friends such as creative images, video, info graph etc. Often people lies some these tactics however they don’t really measured success of their post, however it is an important to gain feedback about programs, products, and campaigns directly from users or other sources.

Twitter measurement lies in the retweets, mentions and increasing awareness about products services and leading quality followers by making motivating involvement. Facebook currency is Like button and sharing of post. The more Likes a brand page has, the more engagement and high reaches obtain for each post. If you want to convert your visitors into buyers then your business must have best solutions of their query. We measure a social media activity for mcdonalds.com and the result was awesome 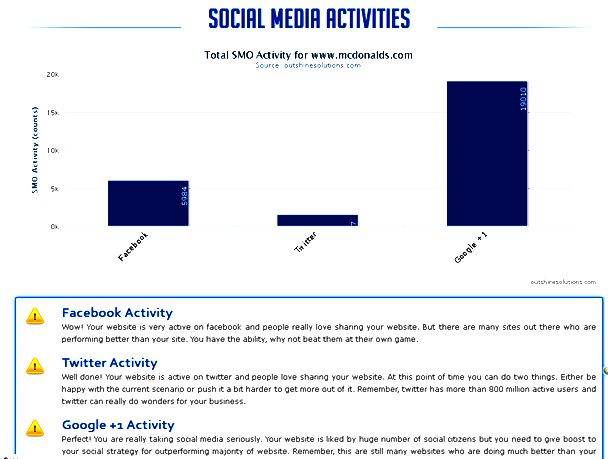 As we found amazing result and find that a number of people love to share and likes all updates from McDonalds. You can also measure social success of your site with site health tool.
Be Social and Don’t hesitate to Entertained Your Community

Facebook and twitter community and members do not only want see only business interaction and post so don’t get bored them and think like him and try to be more social with them. Often communicate with them with on social topics and give your opinion their serious and comic post. Just laugh, cry and other emotion sharing with them though their posts and activity show your expression on their post and also stand for social issue and lead with huge community. So they will never be hesitating to make contact with you in any future requirement.

Facebook advantages- Facebook performed better in the majority of Business to Consumer marketing categories due to its format. A format that allows for the inclusion of photos, multiple outbound links, videos, surveys, promotions, direct engagement and other business to consumer applications. Facebook also facilitates the building of a large network of followers in the shortest amount of time to help market a consumer product or service. Make more interesting to your wall by using interesting Facebook Aps and other application or plug-in such as Outshine Facebook pages.

Twitter advantages- Twitter performed very well in the Business to Consumer marketing category where only 140 characters can explain the motive of successful post. It’s really easy to use and unlike Facebook there is lot widget and aps provided by twitter that make your twitter profile more interesting to your community. Sometimes announcements, controversial statements, special offers, breaking news and other notification may become cause of huge traffic to your site.

The larger study concludes that in order to maximize your Social Media Internet marketing results it’s best to create a presence on both. However, if trying to decide which one to engage first or where to spend the most amount of your available time- It’s important to perform basic Internet Market research, apply the findings to your target audience and weigh the benefits of each platform. The larger study also concluded that SEO combined with Social Media Marketing will yield greater potential results.


Warning: array_chunk() expects parameter 1 to be array, null given in /home/projectx/public_html/wp-content/themes/antares/sidebar.php on line 101

Warning: Invalid argument supplied for foreach() in /home/projectx/public_html/wp-content/themes/antares/sidebar.php on line 104