Catch a Glimpse of the New & Improved Google Adwords

On March 28, 2016, Google announced that it is making big changes to its “AdWords platform” to make it easier for marketers to manage their advertising in a ‘Mobile First’ world. Additionally, Google is looking to provide advertisers with tools to manage the complexities of digital advertising in better ways. Now, AdWords encompasses display and video media that can be bought on YouTube and across the web. The last time Google touched up AdWords was in the year 2008.

You might have noticed an aleart that the top right corner or at the bottom of the screen like the one below.

This Google AdWords redesign, which is expected to roll-out to advertisers until the end of 2017, will be introduced in phases to clients (big & small) to provide feedback along the way. Also, the new interface will be built in Material Design, as plenty of Google’s other products are, for example- Gmail and Map, which should help reduce the amount of issues SEMs experience in the platform regularly.

Reasons on Why Is Google Redesigning AdWords?

To make AdWords relevant for the future, Google has been Redesigning it since March 2016. As internet advertising moves from text-based static ads to other formats like video ads, this big search engine is looking to make AdWords relevant to manage the increasing complexities in digital advertising. Also, it is looking to make AdWords more customizable for individual needs and give simple yet effective tools for marketers to manage their campaigns. For example- AdWords will now quickly show the performance of the campaign for every device like desktop, smartphone, and tablet, as Google understands the significance of advertising through multiple platforms.

Furthermore, the video platform of Google that is “YouTube” is going to attract more advertisers as video consumption increases and a redesigned AdWords with capabilities to manage as well as effectively monitor various ad formats, will be extremely useful for Google’s advertisers. Besides, it will provide advertisers easy access to relevant data like the results of each campaign or the percentage of traffic coming from mobile devices.

Another big reason on why is Google redesigning AdWords is Google has made approximately $74 billion in 2015 and it wasn’t from winning a few matches of Go or not from painting weird dog montages. But, a huge majority of Google’s revenue is from advertisements slipped into its free services such as YouTube and Search. That’s why AdWords is Google’s most vital product, as it allows a million different businesses to manage keyword-driven ad campaigns across Google.

Will There Be Any Change in Functionality?

This redesign won’t affect the way campaigns are structured/run, Just like the Enhanced Campaigns update. Also, the prime focus will be on updating the way data is displayed.

You will come across a few changes due to this redesign process. For example- Ad groups and Campaigns will be displayed in the left-hand navigation. However, clicking on those campaigns will bring up a dashboard view which Google call as Overview screen, which will be available at the ad groups, campaigns, and ad levels. 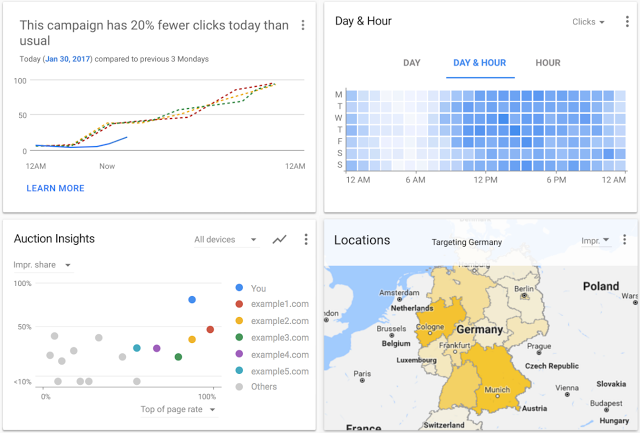 Apart from this, all the secondary navigation runs along the left side, and parallel to the primary navigation. Also, options like Locations, Devices, and Sitelinks are surfaced in that navigation instead of buried under Settings. But, only relevant navigation will be surfaced in each view. So, if you are looking at a display campaign that does not have keywords, then Google won’t show a “keywords tab.

The first worthy difference is in the speed of the user interface- no longer does it take a significant amount of time to swap in between ad groups, keywords, and campaigns. This will save time, particularly in large accounts where plenty of ad groups and keywords can bog down the user interface to the point where page need to be refreshed or won’t load.

The main menu navigation bar has been moved to the left side of the page and listing everything from top to bottom. Also, most of the tabs from the old UI are still present, however, you will see some new ones. For instance- The dimension’s tab has been removed and broken out into their own tabs such as Settings, Ad Schedule, Locations, Advanced Bid Adjustment and Devices. Extensions and Ads are grouped together. You can see all the extension in an ad group at once instead of having to switch in between each sort.

The new data visualizers are the biggest addition to the AdWords interface. New graphs make it possible to see and analyze data in seconds instead of hours. It begins with the overview tab that can be used at the campaign, ad group, and account level. There are many noticeable additions to the new AdWords UI, but my favorite addition is The Day & hour card so far. The Day & Hour card is situated on the main Overview dashboard and the Overviews for each ad group and campaign. In each of three views (Day, Day & Hour, Hour), there is a drop-down menu to choose a metric. Rather than having to pull all the data into excel to create these charts, they are accessible when you first open the interface. Also, you can switch between the metric of your choice to view your data.

The Timeline for Rollout

It is expected that the redesign process rolled out completely by the end of 2017.

It Is Not an Open Beta?

If you are thinking that this is an open beta, then you are wrong. Google will be getting out to advertisers, and there is no way to get yourself added to the testing schedule. Paul Feng, AdWords product management director, explained “There’s not a specific focus or profile of advertiser that will be included in the testing. Some of the initial versions will have an SMB focus since they tend not to use all the features, but we plan to make it available across the spectrum for getting feedback.”

Stay tuned with us we will keep update you on all changes which will be made by Google in AdWords.


Warning: array_chunk() expects parameter 1 to be array, null given in /home/projectx/public_html/wp-content/themes/antares/sidebar.php on line 101

Warning: Invalid argument supplied for foreach() in /home/projectx/public_html/wp-content/themes/antares/sidebar.php on line 104